I have recently released a fitness app for Windows Phone as part of one of my final year modules, the app will track your route as you record a session of exercise, this can include; walking, running or both. For my module, I was given a specification with features that must be included, including the use of polyline to show the route taken and using the sensors in the phone. The name was as defined in the original specification for the module, hence the standard nature of it. 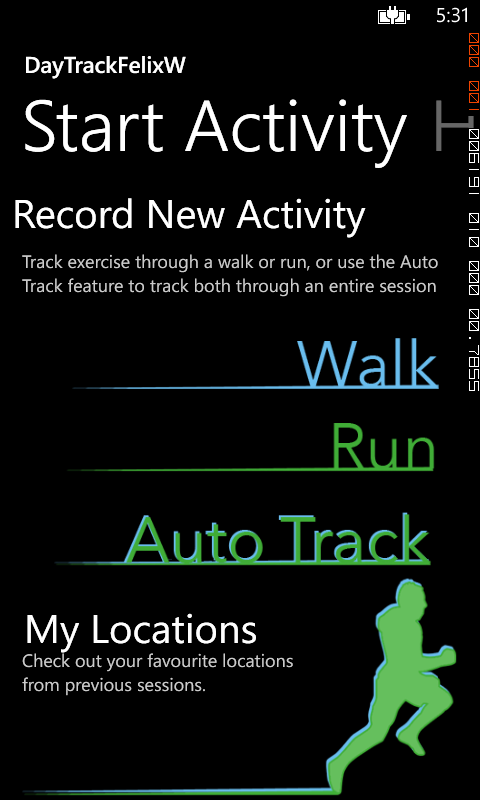 The app took a total of 6 weeks to make, along with designs and programming in the app. This is my first app to be released, where all of the assets and work is my own. The app has a fully working session tracking screen, where it will tell you how much energy you have used, the distance you have traveled and the time elapsed. There is also a history screen that will show detailed accounts for every session you completed along with the ability to share a session on Facebook. The app also makes use of live tiles for background updates and the ability to mark your favourite locations on a map for easy planning of routes.

The development started after creating and defining the specification that would be needed, and the development would take a back seat to other modules for the first 3-4 weeks, due to the more intensive nature of the others. I was using Visual Studio along with the Windows Phone 8.0 SDK for this project, software I had used before and understood the tools available. The actual development of the app was very smooth and ran into very few problems during the process. Once again, I would have to integrate Facebook, but with previous experience using the API, it was not so bad this time, and I had it working within a few hours.

With all the data being saved locally, through isolated storage, there was a slight issue with my naming conventions to allow me to get data back to the app, but after re-thinking and evaluating how it would be used, I was able to figure this out before the app was due to be published.

Whilst I have created other apps before this one, the experience gained from this one has been really helpful to learn the whole process further, from design, to implementation and to publication, for this module I was responsible for all parts of the development as I was the only person to work on the project.

Frozen Fishy out.
Posted by Felix Wentworth at 11:55