New Release: Democracy: The Board Game

Its got climate change, human rights, the economy, civil unrest, social stability and elections.  You can control and develop your education, health, agriculture, transport, housing or military.  You can defeat the Dictator, or you can be the Dictator.


Dictatorship or Democracy … YOU DECIDE!

You are playing for Votes, and Votes mean Power.  So will you gain Votes through co-operation or domination?  Votes can be lost as well as won.  Will an economic collapse take away all your votes, or will a natural disaster wipe out all your developments?


Play DEMOCRACY... The fate of the world is in YOUR hands.

In August 2014 we were tasked with recreating the board game into an app for iOS devices with local multiplayer as a necessity and the opportunity to develop into network multiplayer. Once the project was given the all clear work began on it quickly.

The development of Democracy: The Board Game was always going to be different to any other that I had done before. This was a mobile game based off of a real board game, so a lot of the key features and core gameplay was already set up and figured out. This meant we would have to recreate the board game for mobile devices as closely as possible.

We started by actually playing the board game, this meant sitting down round a table and playing a board game the old fashioned way to give ourselves a chance to understand the game better and start to figure out the process to make the app. After a good 3 hours, and some bad luck from the dictator, the delegates had won and the game was over.

The models had been created already when the concepts for the game were made a few months ago in the pitch for development, so now we had to add models to the game and start making the game. It was important to get a good set of base code to work from and develop as we introduced more and more features. The basic code structure was in place by the end of the second week and we were able to start looking at adding in AI behaviours to make sure every game is full of players.

It was 4 weeks before we got the basic gameplay sorted and working with the menus created within NGUI, the players animating, the ability to control facilities and developments, handling receiving votes (currency) from players and selling facilities when needed. Now we had to make sure everything was animating, the sounds were in and adding in a tutorial for new players to understand the game better.

By the 5th week we were in a very strong position and the game had come along really well, we could now focus on fine tuning the game and making sure the player understands what they are doing and how to play the game.

As it came closer to the end of my work at Troll inc and the start of my final year in university. It became closer and closer to getting the game finished in time, with small bugs needing removed and polishing added. We had just a week of working later to make sure we had the project finished before we were to head back to uni.

The game itself was fully functional with audio and all core functionality included and was beginning to look like a full game. The week of testing proved to be important for the development and great for the look and feel of the game. In the final week we were able to create a full tutorial system for the app and the board game, along with some finishing touches that add to the quality and feel of the app.

It wasn't for a further 6 weeks that the app was sent for submission to the app store, this was due to a few bugs that were being found from specific scenarios being played out. These bugs could have only been found by countless hours of testing. Therefore, the delay from app completion to app store submission has been vital in insuring the app with polished. 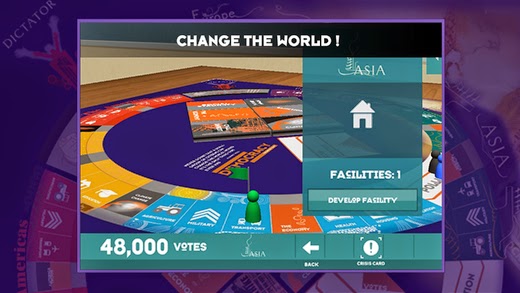 Democracy: The Board Game is now available to download on the app store.

Posted by Felix Wentworth at 11:08