The End of Placement

Its coming to the time for the end of my placement, and in this post, I want to talk about the benefits I feel that exist with doing a placement during a degree in an indie games company. I am fully aware that there are many cases of students disliking placement, but in my case, I have had a really good time. 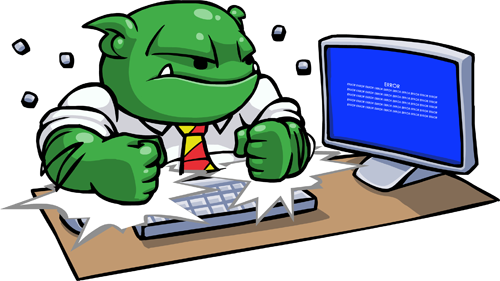 My placement started 11 months ago in July 2013, and since then I have developed my abilities more than I could have imagined I would and have been offered a great deal of experience. At the time of writing this, I have been a major contributor in developing 4 games/apps, of which 3 have been released for mobile devices: Chicken Jumper, Medical Me and Jellyflug Antibody Assault, and helped testing in 3 other games. As soon as I joined Troll Inc, it became apparent how much I needed to pick up and learn, and with that, I feel that I have learnt so much in a short space of time.

At the start, as with every new placement student at Troll inc, I was instructed to refresh my skills in Unity3D, a simple start, to what was going to become 11 months of hard and rewarding work. At the end of making videos for Unity3D, I was thrown in the deep end where I was given Jellyflug Antibody Assault to work on with 5 other developers at the time. This was to be the first big project I ever worked on. Working on the game covered almost all aspects of making a game for mobile, including getting involved with some art.

As the year went on, and programmers finished placements, Jellyflug Antibody Assault was finished and it was time to move on to another project, this was when I started working on Chicken Jumper and Medical Me, and then not before long working on another app yet to be released.

Working at Troll Inc has been great, not only has it given me amazing experience and helped me develop my skills, it has given me the opportunity to release games and apps to the market, allowed me to work closely with different aspects of the game development team and cemented the idea of working in the games industry. It has also given me the confidence to work on apps and games by myself, which will surely help me a lot in my final year in uni, where I am to design and create a game by myself. 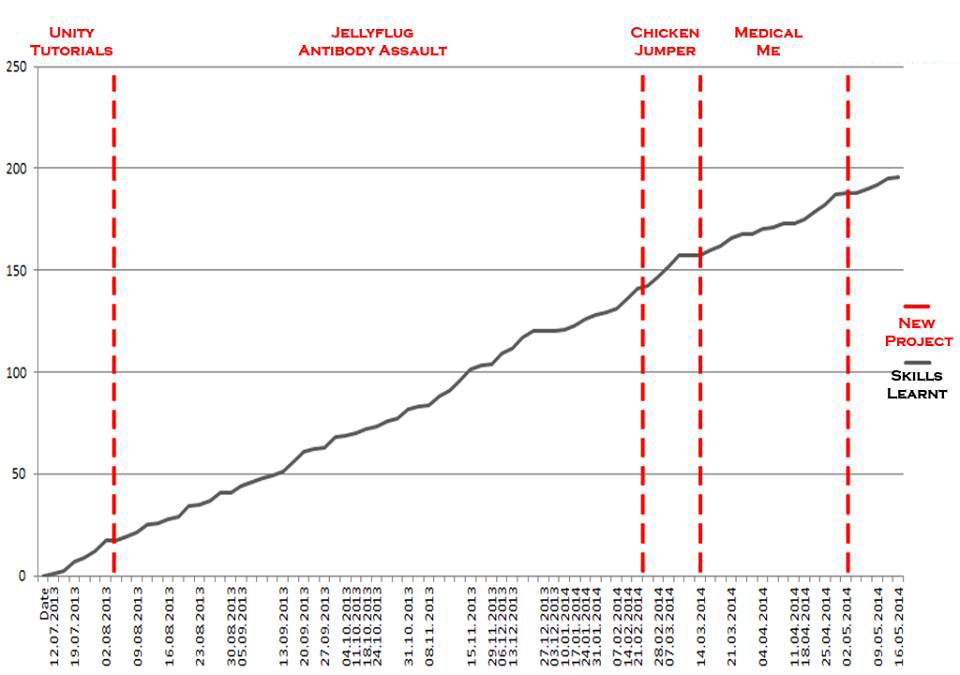 For the report for my placement, I constructed a graph that shows a self analysis of skills learnt over the course of the 11 months and my perspective of their importance to working in the games industry and my degree. I feel it is interesting to look at as a 'look back' at the previous year, as it clearly shows that over the whole year I have learnt new aspects and techniques of creating games and apps for mobile development. It is important to keep in mind that this is a graph with values decided by me based on their importance, with key skills ranging from creating level art to testing and performance optimisation. For each of the new skills I learnt week by week, I rated them on a scale of 1-5, 1 being a minor skill, and 5 being a major skill learnt.

Before I started at Troll Inc, I had only been programming for 2 years, with little knowledge in various languages, and now I feel more competent and have been introduced to new languages and software(for me). I have become really comfortable with C# and the Unity Engine, but I was also given the opportunity to try out Xamarin for app development and explore app development for Windows Phone 8 using Visual Studio. This is something I was not necessarily expecting to do when I signed my contract with Troll Inc, but now I feel comfortable in games and apps development, I will not complain. It also gave me a chance to look at some HTML scripting.

Where it has been difficult financially this year, I will never look back in regret about the experience I gained at Troll Inc, and I will encourage anybody who is thinking of applying for placement, or even a degree with a sandwich course, to give it a go as you only have something to gain. Working in a small indie team of people is really exciting, often with new projects to work on, and surrounded by talented people is a big encouragement to stay up to speed with everyone else where everyday there is a new challenge to face.

I now look forward to working for Troll Inc over the summer, working on another game title and more, then move into final year of university.

Frozen Fishy out.
Posted by Felix Wentworth at 17:16